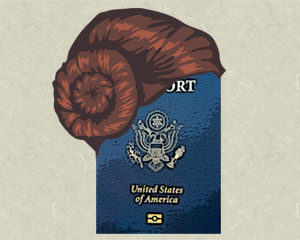 Carrie Fisher passed away on December 27, 2016 at the age of 60. Her death, just two weeks after the release of the latest Star Wars movie, was a major news event. What better time to sell a valuable piece of memorabilia like her old passport?

One of Fisher’s old passports was posted for sale on eBay in January. The passport, issued in May 1983, expired in May 1993. It’s marked cancelled, with a State Department notation that an application for a new passport was filed in July 1993. Bidding on Fisher’s old passport quickly escalated over $2,000, but eBay took the listing down on January 12. The website stated that the listing violated its personal information policy. Under this policy, eBay does not allow the sale of names, telephone number, Social Security Numbers, or other personally identifiable information. The policy is meant to prevent the sale of mailing lists for spam purposes.

However, eBay does allow the sale of old passports. They have a specific policy about the sale of government documents. The government documents policy states that passports issued more than 20 years ago may be sold on eBay. Because Fisher’s passport was issued 33 years ago, the site allowed the seller to re-list the passport on January 22. Within 24 hours, the price of the passport had been bid up over $2,300. At the time of this writing, her old passport is still available for sale, for a bid of $8,177 or more! The auction will close on January 30. As of now, the seller’s reserve price (the lowest price that will be accepted) has not been met. [Update, Jan. 31: The auction closed with a final bid of $8566, but the passport was not sold as the reserve price was not met.] 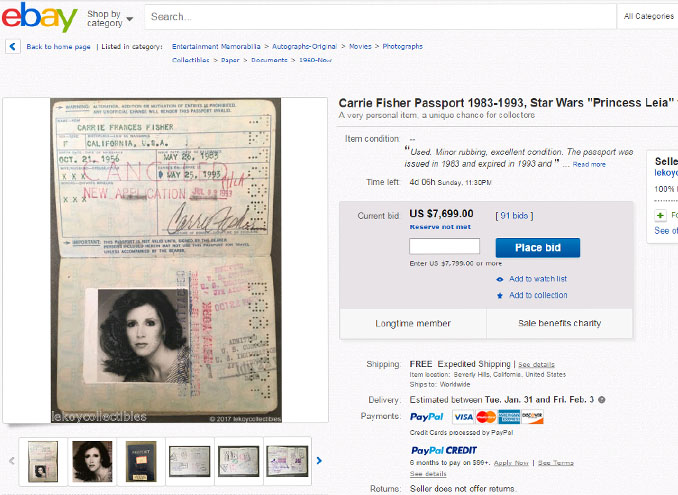 Who Really Owns Your Passport?

Is It Legal to Buy or Sell an Old Passport?

Whether or not US law allows for the sale of old passports is a bit murky. For more insight on that subject, we turn to Tom Topol, a noted passport collector and historian. Mr. Topol is the most recognized expert in the field of passport history and collecting, and has been asked for his opinion on the sale of Carrie Fisher’s passport by numerous media outlets. He is not, however, the owner or seller of Fisher’s passport.

Mr. Topol asks the question “is passport collecting legal?” on his website, www.passport-collector.com. “I was in contact with several government agencies,” he states, “and even they are often unable to give a clear statement.”

In practice, the sale of old passports is, as Topol puts it, “tolerated” by the US government as long as the passport is considered “obsolete.”

What Makes a Passport Obsolete?

An obsolete passport is one that cannot be used to obtain a new, valid passport.

Even when your passport has been expired for more than five years, it can still be used as proof of your citizenship. For instance, if you lose your valid passport, you can file for a lost passport replacement using that old passport as proof of citizenship.

Although eBay says that it’s OK to sell passports that were issued more than 20 years ago, we think the passport would need to be older than that to truly be “obsolete.”

You might be wondering why anyone would want to collect old passports. As far as we can tell, there are two types of collector who would purchase an old passport.

Some collectors acquire passports because the bearer was famous. Carrie Fisher’s passport is likely to be purchased by someone who collects Star Wars memorabilia or who is simply a fan of the actress. Other celebrity passports that have appeared on the auction market in recent years include passports issued to Marilyn Monroe, Whitney Houston, and Muhammed Ali. 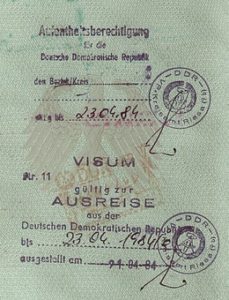 Other collectors are specifically interested in passports themselves. They may value them as historical documents. Old passports are tangible records of countries that no longer exist. The image you see here, with a 1984 visa to enter East Germany (the Deutschen Demokratischen Republik) is a great example. Just five years after this visa was issued, the Berlin Wall fell. There is no more East Germany, so this passport stamp marks the end of an era! Passport collectors may also simply be lovers of travel, who like to look through old passport books to see the many entry stamps and visas, the marks of a life well lived.