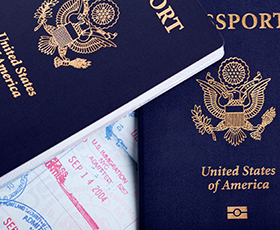 Did you know that US citizens can hold a second passport, also known as two valid passports, at the same time? If you are a frequent traveler who doesn’t have time to get visas before you leave for your next trip, or if you need to travel to a country that won’t allow you to enter if you have Israel visa stamps in your passport, you can get a second passport. These are also called “second valid passports” and issued for four years validity.

Get your Second Passport Expedited in 24 Hours!
Apply Now

Keep reading for a full guide on how to apply for a second passport.

You are eligible to get a second passport if you have a valid US passport and one of the following conditions apply:

Gather all documents required to apply for a second passport

Have your second passport application processed in one of three ways:

How long does it take to get a Second Passport?

Applications sent in by mail will take up to 8 weeks for processing. Even if you pay the additional $60 in government fees for expedited service, the second passport will take 2-3 weeks to be processed.

If you need a second passport, you probably need to get it fast! Using a passport expediting company is the best way to make sure you get the ultimate in expedited service for your second passport. They can get second passports in 24 hours!