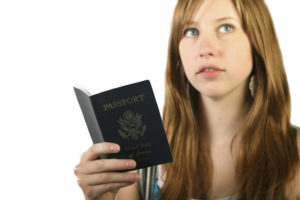 The procedure to replace a lost passport is similar to getting a passport for the first time. It uses the same passport application, Form DS-11. The most important requirement to replace a lost passport is proof of your US citizenship. You can submit either your original birth certificate showing birth in the US, your original naturalization certificate, or you can even use an old US passport!

In addition to passport application form DS-11, you’ll also need to submit Form DS-64. This is a statement that explains how your passport was lost.

A damaged passport is bad news. Severely damaged passports are considered invalid by the US State Department. This means they can’t be used for travel, or to prove your identity and citizenship! If your passport has problems like a torn or missing cover, ripped or cut pages, or unauthorized markings on the information page, you’ll need to replace it using the mutilated passport replacement procedure.

Like the processes to replace lost or stolen passports, the mutilated passport procedure requires the use of application form DS-11 and a trip to a Passport Acceptance Agent. You’ll need to prove your US citizenship by providing your original birth certificate, naturalization certificate, or an older, undamaged passport. You’ll also need to write a brief letter addressed to “US Department of State” explaining how your passport got damaged.

In some cases, your passport might be in poor condition but not badly enough damaged to be considered mutilated. If your passport has minor issues like a small amount of water damage, warping, or the edges of the pages fraying and curling, your passport is still valid under US law, but you may have problems when you try to board an international flight or enter a foreign country. If you are concerned about your passport’s condition, you can apply for an early passport renewal to get a fresh book with a full 10 year validity.

Passport Out of Blank Pages

Frequent flyer? If your passport is full of entry stamps and visas and you need additional pages, you’ll need to replace your passport by applying for a passport renewal. The US State Department used to have a special service to add blank pages to valid passports, but that service was discontinued on December 31, 2015. The good news is that when you apply for a passport renewal, you can request a large book that has 52 pages instead of the standard 28. Large books are issued at the discretion of the passport agency, but there is no additional fee to get the big book.

A new name means it’s time for a new passport! Many years ago, the US State Department used to change the name on valid passports by typing an amendment onto one of the back pages of the passport. No longer! The current standard is that if your name has legally changed, you’ll need to replace your passport and have a new one issued in your new name.

You’ll need to submit the original or a certified copy of your name change document (i.e. marriage certificate, divorce decree, or court order for name change.) If you’ve already changed the name on your driver’s license, you should also submit a photocopy of it.