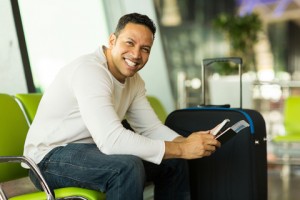 You already know that your smart phone is an invaluable tool to make your life easier while you travel. You can use it to snap photos, navigate around unfamiliar cities, book taxis, get reviews of local restaurants, and keep in touch with your loved ones at home. You may have even used your phone to check in for your flight and download a mobile boarding pass. But did you know that your phone can now help you speed your return to the United States?

The United States Customs and Border Protection agency partnered with tech developer Airside Mobile and the Airports Council International – North America to create the Mobile Passport app, which is available for free for iPhones, iPads, and Android devices. The app functions like an Automated Passport Kiosk. It can be used by US and Canadian citizens who are entering the US at designated airports. Travelers can use their mobile device to complete a profile with basic passport information and answer general questions about their trip. When they land at the airport in the US, this information is submitted, and a receipt is generated on the phone or tablet. Travelers using the app can then bypass the regular lines for passport control and can use the Mobile Passport Control lane. They will need to show the receipt on the phone and their passport to the CBP officer in the Mobile Passport Control lane.

In August 2014, United Airlines became the first US-based airline to enhance their mobile app with a passport-scanning feature. This feature allows travelers to use the camera function of their smartphone to scan their passports when they use the United mobile app to check in for an international flight. United’s introduction of mobile passport scanning was soon followed by a similar feature on the mobile app for the British airline easyJet. Other airlines, both US and foreign, are likely to jump on this trend and extend mobile passport scanning to their passengers.

Mobile phone chargers top the list of items most commonly left behind at hotels, but these new passport apps for smart phones give travelers even more reason to keep those phones charged up!