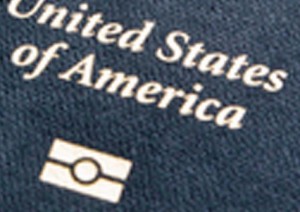 Have you ever wondered what that little gold rectangle on your passport cover means? It’s the international symbol for a biometric passport, which are also referred to as e-passports or digital passports. Biometric passports contain a small computer chip that holding digital information that can be read by scanners at border control stations at international airports.

When biometric passports were first introduced, some privacy advocates were alarmed that they store personal data on an RFID (radio frequency) chip that can be read by a scanner without making physical contact. Indeed, in early 2006 the passport industry saw a small rush of passport applications from travelers who wanted to get new passports without the biometric chip. However, these concerns have been proved to be unfounded. The biometric passports issued by the US and other countries have security measures to ensure that they can only be read by authorized agents. Additionally, the small amount of data contained on a US biometric chip is not enough to be used for identity theft, particularly since it does not contain Social Security Number information.

You’ve just gotten off a long flight back to the US, stiff and uncomfortable after hours in the plane seat, and all you want to do is to get home to clean up and relax… but when you stumble into the airport terminal, you’re faced with the long, long lines at passport control. After that, it’s more lines to clear Customs. It’s not a pretty scene.

Biometric passport technology is helping to make those long lines a thing of the past. Automated Passport Control kiosks at major US international airports allow travelers with eligible passports to use a self-service kiosk to process their entry and Customs information. It takes less than two minutes to use the kiosk, and travelers who live together can be processed at the same time. In the past few years, more and more airports have installed the automated passport kiosks. The payoff in passenger efficiency has been great enough that these airports are investing in even more kiosks, including Miami International Airport which will install an additional 44 passport control kiosks this year.

The Future of Biometric Passports

More and more airports in the US will add self-service kiosks to use the biometric passports, and the airports that already use the technology will continue to add more of the kiosks. In the US, Customs and Border Patrol will roll out a program in late 2015 to allow Permanent Residents (“green card” holders) to use the kiosks when re-entering the United States. US citizens are now able to use automated passport control kiosks for immigration processing at some foreign airports, including airports in Canada, Aruba, and Abu Dhabi, and we expect that in the coming years, additional countries will open up automated kiosk services to US citizens.