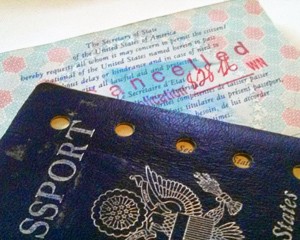 If you are renewing your passport for the first time, you might wonder what will happen with your old passport. The old passport you submitted with your passport renewal request will be marked cancelled, even if it is already expired, and it will be returned to you. Passport books can be marked cancelled with a stamp or by having holes punched in the cover. If you also submitted a passport card, it will be cancelled by having one corner snipped off. Don’t be surprised if your cancelled passport arrives in the mail after your new passport, in a separate envelope.

What should I do with my Cancelled Passport?

You might think that it’s a good idea to shred or destroy your old passport, the way that you cut up your old credit card when you get a new one. Don’t do it! Hold on to your cancelled passport. Store it in a safe place – you may want to store it in a different location than your valid passport.

Your old passport, even though you can’t use it for travel, is still a useful document. Here are some of the reasons you should keep your old passport.