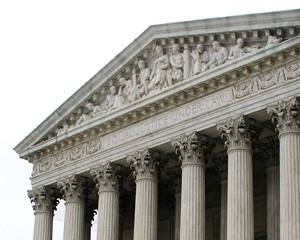 US passports are in the news again this week as the Supreme Court announced their decision on the “Jerusalem passport” case. In this case, Zivotofsky vs. Kerry, a 12 year old boy born to a US citizen mother sought to have his place of birth be listed as “Israel” on his US passport. We’ll look at this case in more detail, but first let’s consider how other places of birth are listed on US passports.

Travelers Born in the United States and US Territories

Born in the District of Columbia? Your passport will say “Washington, DC, U.S.A.”

Travelers Born Outside the United States

It gets a bit more complicated if you were born in a place that now is disputed territory or is part of a country that is not formally recognized by the United Nations or the United States. The US State Department’s Foreign Affairs Manual, which contains all the official guidelines for passports, devotes many pages to specifics on how certain new countries and disputed locations should be listed on passports. One interesting example is that of Taiwan, which is not officially recognized as a nation by either the United States or the United Nations. The regulations allow people born in the Taiwanese islands to choose for themselves whether they would like their passport to list the place of birth as “Taiwan,” “China,” or to list the city of birth only (i.e. “Taipei.”) In all other cases, the State Department is quite specific as to what country should be listed, although they allow travelers who object to that country name to use the “city of birth option,” meaning that they can list the city name only, with no country mentioned.

What if You Weren’t Born in a Country?

The city of Jerusalem is not recognized by the United Nations as belonging to any one nation, as Israel, Jordan, and Palestinian forces all make claim to the city. US State Department regulations have long required that the “city of birth option” must be used for travelers who were born in Jerusalem. In 2002, the US Congress passed a law that US citizens born in the city of Jerusalem should be allowed to have “Israel” listed on their passports, although the “city of birth option” would remain available. President George W. Bush signed the bill into law as part of a larger package, but as both his administration and the Obama administration do not recognize Jerusalem as part of Israel, the State Department refused to enact this law.

The Supreme Court case was brought by the Zivotofsky family.  In 2002, shortly after the congressional law was passed, a US citizen named Naomi Zivotofsky gave birth to a son, Menachem, in Jerusalem.  Menachem is a US citizen by birth because his mother is a US citizen.  The family tried to have Menachem’s US passport issued listing “Israel” as the place of birth, but government officials refused due to State Department policy, and issued his passport with “Jerusalem” as the place of birth.  The Zivotovskys took it to the courts, all the way to the Supreme Court, and on Monday, June 8, 2015, the US Supreme Court ruled in favor of the US State Department.

The Supreme Court decision has struck down the 2002 congressional law, and upheld State Department and presidential policy. US citizens born in Jerusalem will continue to have “Jerusalem” listed on their passports until such time as the Middle East peace process makes clear which nation holds sovereignty over the city.